Singles: a perfect snapshot of a particular time 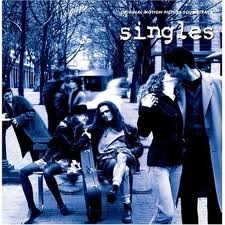 Valentine's day is fast approaching, and what always gets me prepped for Val day is watching romantic comedy movies. I know I'm a man what are you doing, but there are actually some really good movies out there that just happen to be about romance. I feel for the next few days I will write reviews of some of the films I always try to catch around this time of the year.

First we have SINGLES released in 1992 and written and directed by Cameron Crowe he of Say Anything and Jerry Maguire fame. Before he was a successful writer director, Crowe was a writer for Rolling Stone Magazine. So he was able to write about all kinds of bands and write about one of his loves music. Crowe loves his music so much that everyone of his films has specific songs in it that he picked for being the perfect song for the scene, and he is usually spot on.

Singles is a series of stories following friends who all live in the same apartment building and who are all in the mid 20s, fresh out of college trying to find themselves in Seattle. It just so happens the film came out just as Grunge music was becoming huge with Pearl Jam, Nirvana, Soundgarden, Alice in Chains, Screaming Trees, etc. all hitting it big. Pure luck for Crowe that the film hit when the popularity of Grunge was growing that this film made some good money. Especially the soundtrack which has songs from pretty much all the Grunge bigwigs except Nirvana.

The first story follows Linda Powell (Kyra Sedgewick) who does not live in the apartment complex but on her own in a small house. She starts dating Steve Dunne (Campbell Scott) who lives in the apartment complex. Their romance goes up and down through typical romantic comedy set ups, but in the end it is the only truly adult relationship that gets covered in the film.

The Second story focuses on Janet Livermore (Bridget Fonda) whose boyfriend is Grunge band wannabe Cliff Poncier (Matt Dillon who is brillant). He has three jobs, fronts a band called Citizen Dick that is trying to break in and get some of the Grunge glory, but the only problem is his band sucks. In a hilarious in-joke members of Pearl Jam including Eddie Veddar are his bandmates. Janet is totally in love with Cliff but he is more interested in his band and living the rock lifestyle so he treats her casually saying stuff like you know I see other people, and pays attention to the tv instead of her. But Janet doesnt want to feel unloved, so she doesnt break up with him, but she doesnt hang out with him as she tries to figure out what to do with her life.

The third story focuses on Debbie Hunt (Sheila Kelley) who is a loud brassy woman who works for the local new station who tries to find love anyway she can, including doing dating videos. In another hilarious cameo Tim Burton plays Brian the director of her dating video which is one of the most bizarre things you will ever see. And freaking hilarious!

All the characters interact throughtout their stories since they are friends and neighbors as we get an absolute brillant snapshot into what life was like for mid 20 year olds right out of school finding themselves alone and trying to grow up but still hold on to childhood. It is a perfect shot of what was going on in 1992 Seattle, and looking back on it 20 years later still seems timeless while keeping you ensconced in the 90s Seattle. It's hard to explain but it is something that you just need to see.

Singles is funny, heartbreaking, and real. And an absolute delight to watch around Valentines Day. The couples are real, the desperation for love is real, nothing seems to outlandish.  I liked most Grunge music so I still blast the soundtrack which is fantastic. The film is filled with cameos from such actors as Jeremy Piven, Victor Garber, Peter Horton, Eric Stoltz as the most annoying loudmouthed mime, Bill Pullman who gives us a perspective of a late 20 early 30 year old as compared to these kids, Tom Skeritt, Ally Walker, Various members of the local popular Grunge bands like Alice in Chains and Soundgarden, Cameron Crowe himself pops up in a cameo as what else a music reporter. And you will be surprised to see Paul Giamatti playing the kissing man. Great music, great atmosphere, great direction, great acting. One of my favorite movies of all time and I am dying to watch it again soon.