So LOST ended yesterday, on what I would say a high note, but there was still some questions as to the ending. Let me do a little background on my Lost habits. I watched the first season in it's entirety and half of the second season, missed the third season, except for the final episode, I caught up reading synopsises on various websites, watched half the 4th season, and all of the 5th and sixth. I own all the DVD sets except season 5 which I hope to get this week and season 6 which does not come out until 8/24. So I have followed it pretty regularly and I was very happy with the endings of the different relationships in this final episode but the final 10 minutes or so were a bit strange, though I loved them and I have a general idea what it is about.
SPOILERS BELOW
So the sideways flashes were just sort of a Limbo, heaven's waiting room as it were, and then when someone eventually gave in to it, they remembered everything that happened on the island and then went and waited for the others to arrive. As Christian Shepard stated to Jack, everything that happened on the island happened, some people died early and were just waiting in Limbo until they decided to let go or needed to help someone let go. Some lived long lives, some died early, but in the end they all went to one place to be together and move on to the next level. And some were not ready to leave their limbo, or decided to stay like Ben who didn't want to leave his limbo, or he felt he did not deserve to go. That seems to be the gist that most people are reading into it.
It makes it into a great ending to a series that still has a ton of questions that need to be answered, but this show was about the people on the island and not what the island was. I will miss the show and I hope to catch up on all the episodes I missed. Lost was great and it will be missed.
Posted by Holidill at 2:48 PM 1 comment: 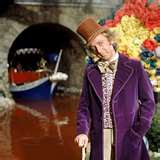 "What is this Wonka? Some kind of funhouse?" "Why? Having Fun?"

Back before Blogs were the big thing I used to write what I called an email column, which I guess was a predecessor to a Blog. I wrote movie reviews and other things of interest to me and sent them out as emails to some people, Family and friends mostly. One of the columns I used to write was one called Greatish Performances, which I think I stole from Movieline or EW or Premiere or one of the myriad of movie magazines I used to read. They would take a performance from an actor or actress and just focus on that, not really getting into a review of the film or TV show they wrote about, but a review of a great performance. I have decided to bring that back.

I was flipping the remote around the other day and caught the classic 70s musical Willy Wonka and the Chocolate Factory. This happens to be one of my favorite films and the main reason why is the utter insanity that is Gene Wilder in this film. The funny thing is he does not appear until about 45 minutes in because you have to set up the storyline, 5 lucky kids get a chance to get to see Wonka's chocolate factory. Wonka having been a recluse for so long finally appears walking with a cane very slowly and looking very old, then the cane gets stuck and Wilder falls but he rolls and stands up, not old and weak at all, just very deceptive, and the start of his deception. While you spend more time with him you can't believe anything he says or does he's the greatest con man in the world and you love him.

Wilder plays him with a sparkle in his eye, as if he is having the time of his life. This film is weird enough that it gives him license to go out of his head and he does and he is fabulous. Be it the heartfelt singing he does about Pure Imagination, or his insane glee about Augustus Gloop getting stuck in a pipe, or Violet Beaureguard turning into a blueberry, or best of all Veruca Salt getting dropped into the garbage chute. He loves that this horrible children are getting their just desserts, and on top of that he even messes with their parents who are enabling their children's bad habits. It's a fun, sly little act that Wilder nails. He acts like every bizarre thing that happens in his factory is perfectly normal and you love it.

Wilder is loads better then Johnny Depp's portrayal in Charlie and the Chocolate Factory, though if Wilder's performance did not exist, Depp's would be a good start, but Depp's was just a little out there for me. His Wonka was a kooky recluse, Wilder looked like he was just biding his time and having fun. And you will enjoy his performance as well.
Posted by Holidill at 2:51 PM No comments:

It's been over a week since My wife and I saw Iron Man 2. I've let it digest in and have decided to write my review. Real quick, those who know me, know I am a huge movie geek as well as a Comic Book geek, so I always have special places in my hearts for Comic Book movies, yes even the bad ones. That being said. I really liked it, but didn't love it. SPOILERS BELOW!!!

The first one was an instant classic because as a lot of reviewers have said it focused more on the characters and not the CGI, but in this one you need to surpass the first one with huge set pieces and awesome effects. I get it, and that works, but I feel some of the characters got short shrift, especially Pepper Potts played by Gwenyth Paltrow. She was quite a force in the first one, this one she gets an interesting promotion and they really don't touch on it that much. Don Cheadle steps into the role of James Rhodes and again his character is just kind of there, though he does have a few quick ass scenes as War Machine. Scarlett Johannssen plays the Black Widow, and again gets very few scenes, though like Cheadle, she gets a kick-ass fight scene in full Black Widow regalia, and she is awesome. I wish we could have seen more of her as well. Instead we get a lot of Robert Downey JR., Mickey Rourke, and Sam Rockwell.

Downey I get, he is Iron Man and the main focus of the story SHOULD be on him as it is. He gets some great plot points as he should and the focus is on him. By the way he nails the role and is the perfect actor for it. If only he was slightly younger.

Rourke and Rockwell are the villains and I get they need some time as well, but if that is the case, don't introduce the Black Widow, or get Pepper involved more in the plot. As villains I was slightly disappointed in Rourke's Whiplash. He does not wear the Whiplash costume, though his electric Whips rock. He uses am ARC device like Iron man, and in the final battle he is in a metal suit. Look Iron Man has a lot of villains who are not in Armor, and I realize also that you don't want the villains to wear garish suits, but it is a comic book movie and this is the character. If you wanted another metallic villain you could have had Rourke still be Russian, but he could be the Crimson Dynamo and that would logically lead to having Black Widow in there as well since she is Russian too. But they didn't do that.

Rockwell as Justin Hammer is done a lot better and is closer to the comic book character. And I guess that is where some of my criticism lies. I have got to get it into my head that these movies are not adaptations of the comics, but are using the characters. So keeping that in mind the film is great and gets people interested in the characters so they may check them out in the comics. And that is all I really ask. Go see it you will enjoy it. It is a big Summer Event Film. ENJOY!
Posted by Holidill at 2:43 PM No comments: