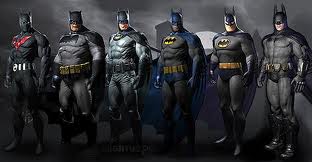 So Ben Affleck has been named as the next Movie Batman in the 2015 Superman/Batman movie and the internet loses it's shit. Sigh. It's great that so many people care about a fictional character, but come on people let's give him the benefit of the doubt. So while I was reading all of the twitter hate, love, indifference, I began to think about all the other actors who played Batman. Each one had an upside and a downside. So I thought again. Hey maybe I should put my two cents in well because I can. Then my friend Gary suggested I also talk about the villains and secondary characters in the films as well. And I think I will but in a different Blog. For now I am going to put down my thoughts on all the Batman's in the Modern era, yes hearkening back to the TV show Batman. These are only the live action ones, since the animated one is the best representation of Batman, but it is animated and not live. So away we go. If you disagree, agree, or are indifferent let me kow in the comments section.

ADAM WEST: BATMAN 1960S TV SHOW: I grew up watching the reruns of Adam West as Batman, and as a kid I loved them. But now has a grownup and a bit more jaded it is exactly what it was trying to be. Campy fun for kids. This was not a serious take on Batman, it was a cleaned up family friendly version, which to be fair was what the comics were at the time. It was in the 70s when Batman started getting gritty. Adam West was fine as Batman. His upside is he loved playing the character, you could just tell. He is also an iconic figure for people my age and older. He was Batman, and it was fun. The villains were great, everyone appeared to be having fun, and that is where the downside is. This Batman was a goofball, someone who easily figured out things and took out the bad guys easily and escaped from the perilous deathtraps easily using his gadgets. He was not the dark knight. But again let me preface that was not Batman at the time. The thing that really bought out the camp was stuff like the Bat-Tusi, or walking up the side of the building and stopping to talk to people, and the old chums. But in the end he is a product of the times and Adam West adored playing Batman. And that is cool.

MICHAEL KEATON: BATMAN 1989, 1992 BATMAN, BATMAN RETURNS: When they announced that Michael Keaton was going to play Batman, I flipped out, but that was before the internet so I could not vent my frustrations. He was a comedic actor, what did he know about comics and playing Batman, we were going to get the campy Batman back. But then I started thinking. He was good in Clean and Sober, he could do Drama. Let's see what happens. I loved Tim Burton, and they had cast Jack Nicholson as the Joker which was pretty cool (at the time) so let's see what happens. What we got was a great beginning to the modern era of Comic Films. The Superman series had fallen into parody, so this was almost a new beginning. And Keaton was good. The film was darker then the campy tv series, and got a lot of stuff right. The music by Danny Elfman was spot on, and it was cool to see a comic book film which became a huge hit. Keaton's upside was that he had a great Batman voice, he looked cool in the outfit, and you could almost believe he was crazy enough to be a guy who dresses like a bat. He was not as good looking as Bruce Wayne is usually envisioned but he was good. The downside, He was a little small to play the role, did not have the physical build to be Batman who in the comics had worked for 10 years to refine every aspect of his life to fight crime, I didn't get that from Keaton. His Bruce Wayne was a little too much like Chris Reeve's Clark Kent being a little spacy and absentminded, But I get why they did it. To blow the scent off of the fact that this guy could be Batman. I liked the fact that he had some time to show off his brooding self in the films and that helped the cause as well. in retrospect I liked Keaton as Batman, and am happy to see that he is embracing superheroes again. He is in a film out next year about an actor who played a Superhero in some successful films but is now down and out and they are rebooting the character and he wants back in. Looks good.

VAL KILMER: BATMAN 1995 : BATMAN FOREVER: Val Kilmer is an interesting actor, he has lost it recently, but in the early 80s he was having fun acting in films like Real Genius and Top Secret! and even Top Gun and Willow some what, but when the 90s hit he was in a broody attitude taking roles in dark and conplex films and not showcasing his fun side. He was becoming like the anti-actor and that is why he could have been a great Batman. He had the broody angry look down, was still handsome, but in Batman Forever he just did not look like he was having fun. It could be that Joel Schumaucher reverted the series back to the campy side which was a major blow for the film series and the character. Just think what Kilmer could have done has the more broody angry Batman. The upside was he was broody and angry, he was handsome, he gave off the vibe that he was also pretty smart, but he just seemed like he was angry at taking on the role and was not exploring the depths that Batman has. And that was kind of the downside. He was a downer all the time, yes Batman usually is, but he does have his moments of humor and hapiness and none of it showed here. Plus he was acting in a terrible film directed by someone who really didn't get what audiences wanted to see in a Batman film, and reverted it back to the cheesy campy film. Val could've been a great Batman, he was just in the wrong place at the wrong time.

GEORGE CLOONEY: BATMAN 1997: BATMAN & ROBIN: UG. Is all I have to say. One of the absolute wort films of all time, however it was only partially Clooney's fault. He was miscast, but his upside is that he tried really hard to be a good Batman, he did a good job with what he had, but he just wasn't Batman. He was handsome like Bruce Wayne is supposed to be, he had a bit too much humor, there was no sign of any real intensity or complexities that Batman has. But the movie was just a total trainwreck from start to finish. He was miscast and to be honest I really did not see him as Batman at all so even if he had another director and script, I'm not sure he could've pulled it off. But at least he gave 110% and tried his best to live up to the character and to that I have to give him credit.

CHRISTIAN BALE: BATMAN 2005, 2008, 2012: BATMAN BEGINS, THE DARK KNIGHT, THE DARK KNIGHT RISES: Bale was an excellent Batman. He had all the pieces, the intensity, the complexity, the slight humor, but it was in a very limited way. Nolan and Goyer had a specific story they wanted to tell. They had a beginning, a middle, and end. They were never going to deviate from this story and therein lies a bit of my problem with Bale. He only had eyes for this story. He did not want to anchor a bunch of one off films, he wanted to create a fully formed character and character arc, that in Dark Knight Rises comes to it's intended end. They did not want to dig any deeper, they had a story to tell and they told it. And that's fine but it's very limited. And that is my biggest issue with him. That and his Batman voice was terrible. I was not a big fan of the end of Batman's story and did not like the finality of it. But as it's own story it is pretty good. I would've liked to see Bale go up against some of Batman's other baddies, especially would've loved to see Nolan's Riddler, but alas that is that.
Posted by Holidill at 2:41 PM No comments: