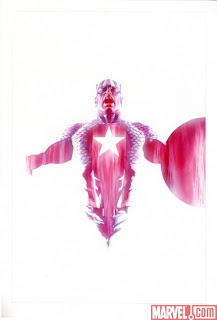 As we in America settle in to celebrate the birth of our nation, I would like to talk about death for a moment. But not in a downer type of way, more along the lines of a concern.

For years death has been fluid in soap operas and tv shows. It's used as a game changer and a way to create buzz. But we all know in alot of cases, Soap operas especially that death is never an end and soon enough the death will be undone and the character who was killed will be back shortly. But we have given it a free pass since it's entertainment. But now it is starting to permeate into comic books again.

In the old days of comics when a character died, they were dead. Examples are Bucky, Captain America's partner. Uncle Ben- Spiderman's uncle. Then death continued into the 70s and 80s. This time the victims are Jean Grey-Phoenix from the X-men, Barry Allen Flash, Supergirl, Robin 2- Jason Todd who was actually picked to die by a gimmick. You called an 800 number to see if you wanted him to live or die after an encounter with the Joker. They fans spoke and they wanted Todd dead. But then a funny thing happened. Phoenix came back to life.

In a strange story that took place about 3-4 years after her original death, Jean Grey was brought back to life and the stage was set for more returns. During the 90s comics became a hot property and many people were buying comics because they thought they would be valuable. So to keep up that apperance both Marvel and DC (the Big Two comic companies) threw everything they could into the stores and it was eaten up. A good example, The Death of Superman.

Superman had been around for 50 years and the comic creators decided they wanted to try something, so they killed him. What followed was media blitzes and huge sales. SO now it was cool to create these kinds of stories. Fans and non-fans went to comic stores and bought up everything they could in hopes they would be valuable. But roughly aboyut 6 months later, they brought back Superman in another huge media blitz that again made them a ton of money. So now it was cool to kill super heroes because it was guaranteed media blitzes and huge paydays. But soon the bottom fell out of the industry and it took some time to recover. Now it was a niche market. The speculators who were burned by this refused to get caught up in the media blitz again. Until Marvel decided to Kill Captain America.

It seems appropriate that the symbol of America was killed during a time of turmoil in the US. The recession was just starting to hit, an unpopular president was still in office, and things seemed to be getting worse for America. That was 2 years ago. It is also approriate that him imminent return begins the same week as Independence day, and America though still gripped in a recession is starting to have some hope with a new president in office. But again it turns Death into a joke, especially with who replaced Captain America. The aforementioned Bucky who apparently was not dead to begin with again! But the one difference this time around is that the story was actually good. It was not the writers decisison to turn it into a media blitz, Marvel did that on it's own, making a big deal about the death of Captain America and drawing the fans and non fans into the stores again. And now a few weeks earlier when it was announced Cap was returning the media blitz happened again.

This is just the most recent example. The fans of comics who read them are now inundated with the return of characters who were long thought dead. Supergirl, alive again, Barry Allen the Flash, alive again. Plus with less fanfare in the mainstream public, many other characters were killed only to return soon after. Wonder Woman was killed, she returned, Superboy (a different one not young Clark Kent) dead, now alive, Kid Flash, dead now alive again, Green Lantern Hal Jordan was killed only to return to life again. Norman Osborn, Harry Osborn over at Marvel, both dead now alive, and the list goes on. It is now a joke when they say such and so is going to die. Big deal he/she will be back before you know it.

Case in point Batman Bruce Wayne. He was recently "killed" in a big story in DC, and replaced by his first sidekick Dick Grayson who was the original Robin. The story is good, but we all know Batman will be back soon.

Finally the main reason for all this cyncism about Batman and Captain America. They both have movies coming up and you can bet the Comic Companies do not want these supposed dead characters to be dead when the films come out. How else will you be able to exploit them again?
Posted by Holidill at 2:43 PM No comments: