So today for some truly odd reason Baltimore County schools were on a 2 hour delay. We had a dusting of snow and it was cold, but other than that I see no reason for it. My wife Dawn and I alternate who takes our daughter Noelle to school on these delays. Today it was my turn. Now there are a few ways we can do this, we can do carpool where we drive over to the school adn wait in line until the school allows students in, or we can walk over since we are only 5 minutes away from it. But seeing as how it is 7 degrees out we usually do carpool. Dawn called the school last week and inquired about the bus. Now we have a bus stop at the entrance of our neighborhood. We never use the bus because it does not come on a normal school day til about 850am, Dawn needs to be in at work by 830am, I have to be in my job between 730-800am. So we have Noelle in before school care. However on these days of delays they are shut down. So we never have used the bus though Noelle always said she wanted to. Well Dawn found out on Delays she can use the bus. So we decided to try that today.

The bus starts it's trek at 1040am on a 2 hour delay and gets to our stop last at 1050-1055am. Seeing as how we never have done this I said I would head out early just in case. We told Noelle she was taking the bus today and she said I was the best daddy ever, So win for me. So 1030am comes and we get in my car and trek the 30 second trip to the bus stop. I park the car and she says she wants to go out and wait at the stop. At 1030am, 20 minutes before it comes surrounded by ice and snow and temperatures of 7 degrees with a wind chill of negative degrees. She said please. So I acquiessed.

We were the first ones there and we stood in the sun but we were freezing our butts off. Soon other cars started to roll up, but the kids were staying in the car with their parents. I asked Noelle if she wanted to go back into the car and she said no. More kids started to arrive and some of them stood out with us. Noelle's friend Alex from Playkeepers the before care place showed up and the two of them talked. Now it is 1050 and it is bitter cold out. Noelle tells me she is cold and I tell her well it's a little late since by the time we get in the car the bus will arrive. So she tells me she wishes we did carpool. I would slap my head but i am frozen. The bus shows up at 1055am and she gets excited again! I kiss her goodbye, tell her I love her, watch her get on the bus and take some pics. They will posted on my twitter feed @holidill for those who want to hear more about my ramblings. She sits in the front row and I watch her drive off. Now I hightail it to my car, walking on two blocks of ice which were at one time my feet and get in my car. I start the car. crank the heat up. And it's cold. FML
Posted by Holidill at 2:25 PM 1 comment: 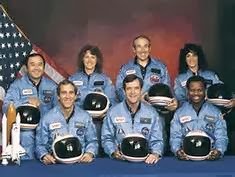 You don't always need an anniversary date to remember a tragedy. And 28 years ago was a tragedy for the United States Space Program that still has not recovered from it. Their Space Program has gone backwards. And then just as we thought it was starting to right itself, another Space Shuttle explosion and again we are relegated to sitting back and waiting.

Space appears no longer to be sexy, it appears to be boring, meaningless, and a waste of money. NASA no longer has any shuttles at all goimg up, the program has been scrubbed. They are now working on a new ship supposedly, but the fact remains that the US Government has it's own financial woes and it is barely giving NASA any money though it is a government program. And I get it. There are bigger things in the world to worry about but it still sucks. I am a space nut, I find space fascinating, and apparently there are plenty of people that still do. Space Telescopes are continuing to photograph gorgeous sights, land based telescopes are discovering millions of new planets, the Mars rover missions are still going strong. Next year 2015 we will get our first ever close up look of Pluto formerly known as the 9th planet, which in itself is a travesty, to me it is still a planet. We are sending probes to Comets, asteroids, we are continuing to discover things about Mars, and Mercury, and Ceres, and Saturn. We are planning tons of missions to planets. Just none that are going to be manned by humans. And that's fine. Because now a seperate entity is creating a media event about sending people to Mars, there is a competition that millions of people entered to be the first people on Mars, though they will never come back. The interest is still out there, it's just we are in a holding pattern, and it all goes back to January 28, 1986.

I was in 7th grade at Dumbarton Middle School. I remember it was lunch and me and a couple of buddies were eating and joking around when someone told us what had happened. I found out later that one of the teachers in the school was showing it to his class since Krista MaCalliff (sp) was going to be the first teacher sent into space. It was a big deal. She was not an astronaut, she was a teacher and she was chosen from a wide-ranging competition. So of course teachers wanted to watch it one of their own was going up into space, living her dream. But tragedy struck, Challenger exploded after take off did not even make it into space. All on board were killed. Later it was discovered to be a defective O-Ring that NASA had been warned about. So they shut down the program for what seemed like years. Now my friends and I did not believe it, this was before the internet, before everyone had cell phones so we had no way of checking to see if it was true. So we started joking about it, and kept saying it could never happen. And I still not believe it through the rest of my day. But i wanted to be sure so when I got home i turned on CNN and sure enough BOOM there it was. I was shocked. I could not look away from it.

It was a rough time for the space program, and shortly afterwards the jokes started coming. Tasteless jokes about the astronauts. And I will admit i laughed at some of them. But on retrospect from a 40 year old perspective, I probably would've smacked myself upside my head and told me to shut up. This was a tragedy, not something to joke about. To my credit, I stopped laughing at the jokes a few months later.

So now it is 28 years later. I see no mention of it on social media. Granted I have not been on Social media all that much today, but I assume we will see very little about it. Maybe more may pick up later this year when one of the cable channels premieres a docu-drama on the explosion. And of course in 2 years we will probably get the huge anniversary stories about it. 30 years. But it is still a tragedy, it is still something we should mention. It almost killed Space Exploration, it did however make everyone very cautious, overly cautious in some cases. I guarantee you. This does not happen, we are on Mars now. BUT it did happen and now NASA is saying we should have people on Mars by the 2030s, maybe by 2036 which would be the 50h anniversary of the explosion. 50 years it took us to get over it. But there is no guarantee on that. Never forget. Hopefully this will keep the story in everyone's mind and hopefully a bigger deal will be made of it in 2 years. By then we should have great pictures of Pluto, and maybe more info about other planets as well, maybe a new class of space vehicle will be created by then as well. Why not name the first one Challenger? It's an homage that would be nice. RIP guys, I know your families are thinking of you today. Just be aware that I am as well.
Posted by Holidill at 1:25 PM No comments: