Before Sunset: part 2 of a 2 part story of perfection 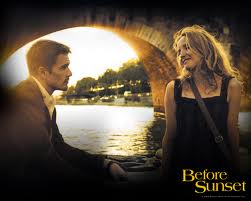 At the beginning of the century I was hearing rumors that there was going to be a follow up to Before Sunrise. A movie I adore, and just wrote about in my blog. I found the idea intriguing considering how the last one ended. Unfortunately in the below review I have to spoil the ending of Before Sunrise so consider yourself warned. I swore to myself if they did make a film I would see it in the theaters. They did, and I did not. Dont know the reason why not. It was 2004, I was working at Diamond, we had no kids and were househunting. So when it came out on DVD I bought it same day. And let it sit til a valentines day maybe 2005 or 2006 when I watched both back to back. I was in my thirties now and I had been watching Before Sunrise on a somewhat steady basis, at least once year around Valentines Day. But I found myself more intrigued with Before Sunset. Maybe because it was newer and I was excited to see these characters doing something different. Then it to became part of my usual rotation again around Valentines Day, and I sometimes found myself watching Before Sunset instead of Before Sunrise now more often. In fact it's been a while since I saw Before Sunrise. I watched Before Sunset last month. Just felt like it. I was sick at home and wanted something fast and easy to watch. Something familliar and warm that I enjoyed to make me feel better. Unlike Before Sunrise, where it took me a little while to see why I liked it so much, I knew right away why I liked Before Sunset, because this film was talking to 30 year old me, because Jesse (Ethan Hawke) and Celine (Julie Delpy) were now in their 30s talking about stuff that concerned us.

For those who did not see Before Sunrise or read my review. 1994 20ish American Jesse (Ethan Hawke) meets 20ish French Celine (Julie Delpy) on a train on his last night in Europe. They start chatting and soon get into full blown deep conversations. The train stops in Vienna and Jesse is flying out of there back to America the next morning early. Celine is heading back to France. Jesse convinces Celine to get off of the train with him and continue their conversation while walking around Vienna.  As they walk they begin to fall in love. Then they start to despair because day is coming quickly and they don't know what to do.

SPOILER ALERT: I AM GOING TO TALK ABOUT THE ENDING NOW:


They made an adult decision to just make this night their only night together. They will not exchange numbers, they will just keep the dream of the encounter alive. But when the reality strikes that they will never see each other again, Love jumps in and convinces them that is a dumb idea and that they will meet back up in Vienna in 6 months to see where the relationship will go, they will not exchange numbers nor try to contact each other before that 6 months. They agree and part, end of film.


Flash Forward, 9 years. Jesse is in France now as a famous writer, who has written a best seller about his whirlwind romance in Vienna. He is finishing up a world tour and will be heading back to America in about 3 hours. While at a book signing meet and greet Jesse notices Celine. After the meet and greet they awkwardly say hello. Celine convinces him to go to coffee just to catch up before he has to leave for America. He tells his handlers what is going on and they give him a cell phone and a number to call when ready. From this point on the film runs real time which is an incredible thing, making the film different and more interesting then the previous one. The old friends go to coffee house and catch up and sure enough they hit it off again and they start talking again about everything. Since Jesse does not want this to end he convinces Celine to walk around France for a bit. Celine is a little worried that he will miss his plane but agrees since she misses him too. So again they walk around a beautiful European city in the Summer in a limited timeframe just chatting away.

Through the conversation we learn that one of them (I wont say who to not spoil this) did not show up in Vienna 6 months later so they had not seen each other til that moment in the bookstore in 9 years. We learn Jesse is married with a son, and Celine is working with a political group to help the environment and is dating a combat photographer who is away on a mission. Through the conversation also we see how the characters have changed in the past 9 years and they have. Jesse who was so confident and psuedo intellegent is now a broken down man who loves his son more than anything, but is still obsessed with the one night he had with Celine (not in a creepy way). He feels that his night with Celine was the pinnacle of love, that he experienced the absolute perfection of love and now is quickly falling. he's not confident, he's not happy, he's beat down, but still has a little spark, a spark that starts to glow again being around Celine. Meanwhile Celine has become totally crazed about life, again not exuding confidence, saying that love is not real it's just an emotion and that she does not need anyone or anything to make her happy, she is smoking, depressed, angry, passive agressive and again it goes back to that night where she felt whole, and when she lost it, she lost her way. Both of these two who were so vibrant and bright eyed in their 20s have been bitch-slapped in the face by reality and it has shattered them. But the more time they spend together you begin to see a healing process. It's even not a longshot to say that they may be soulmates and when they were tore asunder, not for any reason except that they wanted to be adult about it, their souls shattered and now being back together they are beginning to notice that hey, we compliment each other very well.

Again Richard Linklater directs and co-writes with Kim Krizan, but this time both Hawke and Delpy are classified as writers as well, because much like Before Sunrise they improved most of their conversations. The film has the same glow as the original, but Before Sunrise shows us more of Vienna and the exploratory part of their relationship. This one Linklater believes much as I do that the true story of the film is Jesse and Celine finding each other and this isn't a dream like the original, it's real life and he decides to focus more on his actors than the scenary, though there are some nice shots. It's a deep movie, it's not as fun as the original, but that's ok it's a different film from the original and that is what you want.  Hawke and Delpy again are amazing with special props to Hawke who drops the swagger he showed in the previous film and in Reality Bites and shows us a broken, vulnerable man who wants to do the right thing for everybody but himself. It is somewhat reminiscent of the role he played in Dead Poets Society.  Delpy meanwhile is allowed to open up her acting, something she did very little of in the original, and shows us what a young idealist strong woman goes through when her life becomes utter shit. Celine's rage at Jesse near the end of the film is a true highlight showing how damaged she has become by holding on to that night much as Jesse has and how such a beautiful wonderous night has turned both their lives upside down.

The ending is again ambiguous, and leaves you wanting more. I won't spoil it here, but the ending is a natural progression to all the anger they both have, and you can see that they have finally realized that they are healing each other being in each others prescence. It's a good ending, but again much like the first one an aggrivating ending because you want to know what happens next.

Rumors started swirling last year that they were filming or have filmed the third movie. I have not heard anything, but the timing is about right. We have a title called Before Midnight and I am dying to see it. I have my ideas what it is about, but wont say anything because I don't want to spoil it. So hopefully we will see a new film from them very soon. And this time. I will see it in the movie theater. MARK MY WORDS.