Before Sunrise: part one of a two part story of perfection 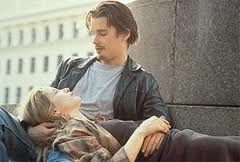 I'm a romantic at heart. I love watching films that have happy endings for couples who appear perfect for each other. I relish that. It proves that maybe even in the real world true happiness in love is attainable. This belief hit me hard after college where I was dumped by one of the few girls I truly loved. It took 5 long years to get that feeling again, and during that time I devoured Romantic comedies and films in general. Especially during Valentines Day when I had no one. Then in 2000 I met Dawn who is my greatest love, but the memories of that time before Dawn creep in every once in awhile usually manifesting in thoughts of what would have happened to me if Dawn and I did not get together? So the feelings of these Romantic Comedies, as unrealistic as some of them are still has a good spot in my heart and always give me a smile. However there was one film during this 5 year span which surprised me on how much I love it. It is to me one of my all time favorite films, along with it's follow up. But it was completely different then a typical romantic comedy. It seemed more real and at the same time more dreamlike and surreal. Which the actors mention numerous times in the film. That film is Before Sunrise.

Released in 1994, I saw it on DVD in 1995 during my downward spiral, and maybe that had something to do with it because it's about two people in their 20s who meet in Vienna, fall in love, but then have to seperate after spending one night together. He's from America, she's from France. Jesse (played by Ethan Hawke) is an American who just got out of a long relationship and wanted to see Europe and find himself. So he spent a few weeks on the train through Europe. Vienna is his last stop before his flight home. On the train he meets Celine (played by Julie Delpy) who just spent time with her grandmother and is heading back to France. They happen to be on the same train home and happen to sit across from each other. Jesse sees her and is struck by her beauty. He then starts to talk to her. They decide to adjorn to the dining car which is a little more quiet and continue talking. They talk about everything, thoughts, feelings, dreams, ideas, memories, anything. They seem to have a good compatability. When the trains stops in Vienna, Jesse has to get off and Celine is going to stay on til she gets to France. Jesse convinces her to get off the train with him since his plane doesnt leave until early morning and he has no money to get a hotel so he was just going to wander around Vienna for the night and then leave in the morning. But he tells Celine it would be better if he could share it with someone, with the caveat if I turn out to be a sleezebag she can just jump on the next train. So they wander through Vienna talking, in June when it's warm, exploring the city, and just talking about everything under the sun. Through their conversations we start to get a picture of their characters.

Jesse first appears to be similar to the character Hawke played in Reality Bites, but slowly and surely we begin to see that he is not a jerk but is a guy who had his heart broken and he is trying to overcompensate for it. Celine is soon able to bring out the nicer guy within. Meanwhile Celine appears to be supremely confident, but we soon see an undercurrent of self-doubt and fear in the path her life may be taking her. These two fall in love while just talking in one night in a magical city knowing full well that sunrise is creeping closer where they will have to say good bye forever. It is a talky film and that is all that really happens in the film, but the conversations are so interesting that it keeps you interested and you start to feel what they are feeling. You are hoping that they can figure out a way to work it out and have a happy ending, but you still get that doubt that is just expounded by what happens at the end. Which I wont spoil.

Richard Linklater directed it and co wrote it with Kim Krizan. But a lot of the conversation is real thoughts and ideas that Hawke and Delpy have. A lot of Improv on that as well. Shot on location in Vienna you get a good sense of the city and the people as Linklater uses locals in all of his scenes. Some fantastic acting as well from the cast as the two leads do a grand job of playing two strangers who find each other interesting and you can see them slowly falling in love, from passing glances, to attempts to try to hold hands or just brush hair out of her eyes. Just simple gestures that overall you may not notice but are perfectly in step with what two people falling in love do.

It is a glorious movie, sweet, romantic, dramatic, and incredibly interesting. Adults will find it more interesting then kids, there is some language, and adult situations in the film so not for kids, grownups will love it, but it may affect people in their 20s more since these characters are in their 20s discussing things that kids in their 20s discuss about the future and growing up, and reality.  Highly Recommended. Especially around Valentines Day. It's sequel Before Sunset is just as good. I will be reviewing that next.